Have you had a doctor say “watch what you eat, your blood sugar is a little high,” or something like this, “try to get more exercise and watch your food intake, your sugar levels are running on the high side.” These are warning signals from a doctor that is not up-to-date with the healthcare guidelines from the American Diabetes Association (ADA). It is time to get copies of all lab reports and look for the A1C% and Glucose results. If your A1c value is above 6.4% and your glucose reading is above 126, then it is time to have a serious talk and find out what the doctor is planning. If the doctor only repeats the above statements, then it says he knows little or nothing about diabetes. For your health and future healthcare, you have a decision to make and it may not be easy if you have been with this doctor for many years.

Under the above scenario, I would urge you to make some telephone calls and find a doctor that knows the ADA guidelines and is willing to do the necessary tests to determine if you have diabetes. This was driven home recently when an acquaintance was talking about his doctor appointment earlier that day. A.J. made a statement very similar to the second one above. I asked him if he had any paperwork for the lab results and he said they were in the waste container in his car. I had him dig them out and when I saw them, I surprised him when I said, OMG, almost under my breath. His A1c was 7.9% and the plasma glucose was 192. I asked him “did your doctor say you had diabetes?” “No,” he said, “just that my sugar levels were higher than normal.” I said that the readings on the paperwork were in the definite area for diabetes and that he had better get to another doctor. He just asked, “you've got to be kidding?”

At that point, I said that since I have type 2 diabetes, I knew what I was talking about and the document he had discarded in the wastebasket clearly showed that he had diabetes. He then said that the doctor would have told him. I said that he could believe his doctor, but I could bet that he was having blurred vision at times, was using the bathroom rather frequently during the night as well as during the day, that he felt tired much of the time, was thirsty all the time, and probably had several other symptoms. He asked how I knew this. I said because I know the symptoms and write about diabetes. A.J. admitted that the answer was yes to the things I had rattled off and asked why the doctor had not asked about them. I said because you did not say anything about them and all he saw was the A1c and plasma glucose reading. I emphasized that the doctor was probably one of the doctors that was afraid of saying anything and just said his sugar level was above normal. 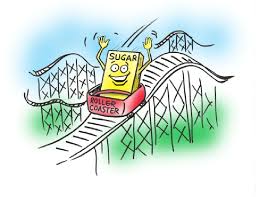 I asked him if he wanted to get a determination done and he said not really. I then asked him if he had problems with pain in his feet, or neuropathy. He asked if I meant a burning sensation and that pain tingling feeling that made it difficult to go to sleep at night. I said, you more than likely have diabetes and I will not go into the other problems that you are looking at if you don't get medication started and get you blood glucose levels under good management. At that point, he lifted his left pant leg and showed me a sore that did not look good. I asked how long this had been going on and he said about six weeks. He said normally something like this would have been healed in about a week. The conversation will be continued in the next blog.