Does Your Doctor Blame You?

Does your doctor blame you for being overweight, not following his directions (nonadherance) for managing your diabetes, and for not taking your medications? Don't be surprised if you need to answer yes to all three of the above. This is the habit that many doctors have and they believe it is your fault that you can't lose weight. They use insulin as a threat for not getting your blood glucose levels down, and then they will say you are not taking your medications when you should or every day.

This will become more of a problem in the future under the Affordable Care Act as the Centers for Medicare and Medicaid Services doles out money for those practices and hospitals that bring more people down in weight and manage their patients more efficiently. This blog by Bob Doherty makes the case. More doctors will be doing this as a matter of course or you will be out the door as they don't want their record besmirched because of what you are unable to do in their eyes. This may also mean the doctors that threaten insulin for type 2 diabetes patients having blood glucose control problems because of the lack of education they have received from these bullying doctors. An article in ScienceDaily may be part of this increased bullying tactics. 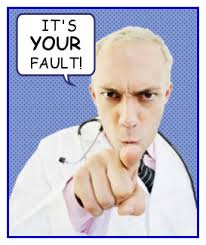 UCLA Professor Abigal Saguy, PhD, wrote a provocative essay in the Washington Post where she called this discriminatory and profiling. She correctly states, “Despite the fact that body weight is largely determined by an individual’s biology, genetics and social environment, medical providers often blame patients for their weight and blame their weight for any health problems they have." I would encourage everyone to read her article. It is well thought out and she uses studies and patient interviews to back her statements.

Bob Doherty also confirms what is happening in our Nation's Capitol because of new regulations being proposed by agencies. If this does not scare you, then remember that we now have insurance that prevents excluding prior conditions from coverage. Now the Obama administration is wholesale throwing this out in the proposed regulations and allowing employers to charge employees more for being overweight or having certain medical problems. Therefore, the “blame the patient” is back in the limelight again and many are going to pay the price. Proposed regulations will allow employers to charge higher health insurance premiums or impose other rewards and penalties to employees based on how well they achieve improvements in their own health status.

Yesterday, January 28, 2013, “House Democrats sent a letter to the Obama administration, objecting to a proposed rule that allows employers to establish "health-contingent wellness programs" that "allow differential rewards based on health status factors, including a person's cholesterol, blood pressure, weight or body mass index." The lawmakers argued that such programs would undermine the ACA's prohibition on discrimination against persons with pre-existing conditions, and would disproportionately harm "certain population groups, including racial and ethnic minorities, such as Hispanics, African-Americans, and some Asian groups [with] a higher proportion of known genetic predisposition for certain illnesses that are screened through biometric measurement such as cholesterol or blood sugar levels."”

Now it will be interesting to see if this is reversed, or the current proposed regulations will stand as they are. Even the ACP (American College of Physicians) “in a comment letter on the same proposed rule, similarly stated "that wellness programs must not be used as a means to discriminate against the sick and vulnerable. Wellness programs must be developed to encourage prevention and improve health rather than penalize those who are medically unable to meet wellness program goals."

This should include the chronic diseases (like diabetes) and other medical conditions people may not have any control over.