Apparently, the United States isn't the only place that clinical trials never are published. January 6,2012, I blogged about NIH-funded trials not being published. Now Canada is having the same problem and it is among universities and research hospitals where they are having the biggest problems.

The CBC of Canada reports that every year, thousands of its citizens sign up to participate in clinical trials. Like the U.S., the results of many of these trials never are published.

And new online tool aims to put pressure on some of the companies and institutions behind the problem. TrialsTracker maintains a list of all the trials registered on the world's leading clinical trials database and tracks how many of them are updated with results.

Amid pharmaceutical companies and research bodies from around the world on ClinicalTrials.gov, maintained by the U.S. National Institutes of Health, nine Canadian universities and institutions rank in the top 100 organizations with the greatest proportion of registered trials without results. 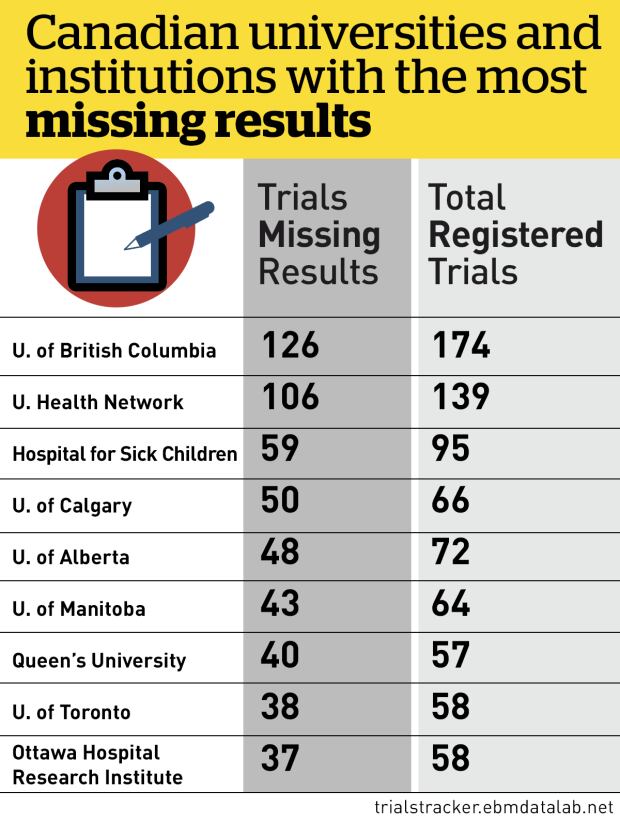 "It's well documented that academic trialists routinely fail to share results," says Ben Goldacre, who was part of the team from the University of Oxford that developed TrialsTracker. "Often they think, misguidedly, that a 'negative' result is uninteresting — when, in fact, it is extremely useful."

The University of Toronto's David Henry says "publication bias," as it's called, is robbing the medical community and patients of important information.

"We've been deceived about the truth about treatments that we've used widely over a long period, in very large numbers of individuals, because of the selective publication of results that are favorable to the product," says Henry, a professor of health systems data at U of T's Institute for Health Policy Management and Evaluation.

But Henry adds that publication bias isn't the only reason results aren't being made public. He says many institutions haven't made it a priority.

"If you leave it to the trialists, they've often moved on to the next trial," he says. "At the end of the day, I don't think they give enough weight to it."