Some Doctors Argue for More Statins

Doctors are doubling down on their right to be wrong and do more harm to patients. With Rosuvastatin/Crestor the only statin still under patent, all of the other statins have lost patent protection, and so the world has changed. It is now cheaper to use the generic statins and doctors now feel that the benefits of low cost far outweigh the harms caused by statins. These doctors are promoting statins for more of the population and this means that the complications of statins will be affecting more people.

Recommendations now state that statins, which decrease low-density lipoprotein (LDL) cholesterol, may be prescribed if lifestyle changes aren’t enough. In 2013, the American College of Cardiology and American Heart Association, in collaboration with NIH’s National Heart, Lung, and Blood Institute (NHLBI), released new clinical practice guidelines on cholesterol treatment to reduce ASCVD (atherosclerotic cardiovascular disease) risk. Among the recommendations was that people 40 to 75 years of age without clinical ASCVD and diabetes should take statins if they have an LDL cholesterol level of 70 to 189 mg/dl and an estimated 10-year ASCVD risk of 7.5% or more. The guidelines also included methods for making this risk estimate.

A group led by Drs. Ankur Pandya and Thomas A. Gaziano at the Harvard T.H. Chan School of Public Health developed a computer model to project the lifetime health outcomes and cardiovascular disease–related costs of 1 million hypothetical U.S. adults. They used data from the nationally representative National Health and Nutrition Examination Survey (NHANES) and several other published sources.

The team found that the health benefits conferred by the current ASCVD risk threshold of 7.5% or higher were worth the incremental costs, according to commonly accepted “willingness-to-pay” public health standards. Lowering the threshold for statin treatment to 3% or 4% could avert another 125,000 and 160,000 cardiovascular events, respectively. Depending on assumptions about benefits and risks, these risk thresholds might also be considered cost-effective options. These estimates can help inform future decisions about balancing costs with quality years of life.

A group led by Dr. Udo Hoffmann at Massachusetts General Hospital and Harvard Medical School studied whether the new guidelines improved the efficiency and accuracy of the previous ones. The group drew on data from nearly 2,500 adults in the Framingham Heart Study. Participants underwent testing to detect coronary artery calcification, an early sign of coronary artery disease.

About 39% of the participants were eligible to receive statins under the ACC/AHA guidelines, compared to 14% under the previous 2004 guidelines. The new guidelines proved more accurate and efficient at identifying people at increased risk of both cardiovascular disease and subclinical coronary artery disease. The findings were consistent for men and women. They were particularly important for people at intermediate risk, for whom deciding when to begin statin therapy is challenging. The researchers estimated that between 41,000 and 63,000 cardiovascular events would be prevented over a 10-year period by adopting the ACC/AHA guidelines compared to the previous guidelines.

The new cholesterol treatment guidelines have been controversial, so our goal for this study was to use the best available evidence to quantify the tradeoffs in health benefits, risks, and costs of expanding statin treatment. We found that the new guidelines represent good value for money spent on health care, and that more lenient treatment thresholds might be justifiable on cost-effectiveness grounds even accounting for side effects such as diabetes and myalgia.

Now we have Big Pharma and a new class of drugs for treatment of LDL called Praluent (PSCK9), which in the USA has been limited by the FDA to treat only people at extreme risk for heart disease from cholesterol. Not that this will slow things as these doctors will just elevate the number of people at high risk and prescribe the drugs anyhow.

In addition, the side effects of Praluent include itching, swelling, pain or bruising at the injection site, nasopharyngitis and flu. Allergic reactions, such as hypersensitivity vasculitis and hypersensitivity reactions requiring hospitalization, have been reported.  Please read this blog by Dr. Malcolm Kendrick for more information on the drug class PSCK9.

If you would like to do more research about statins, I suggest you read the Great Cholesterol Con by Dr. Malcolm Kendrick. This is important if you even think that doctors are doing you a favor by prescribing statins to you. 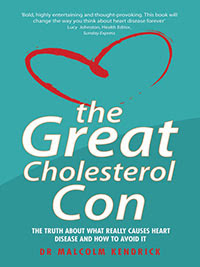 Email ThisBlogThis!Share to TwitterShare to FacebookShare to Pinterest
Labels: Harm by statins