When Patients Can Obtain Their Own EKG

I can appreciate good doctor blogs from time to time. As I said in this blog, these devices are coming. I was somewhat surprised by this one, but we will see more of them in the year ahead. This doctor does what is expected by saying he does not have time to read every EKG presented. That is as it should be under the current medical system, but when the Affordable Care Act becomes the system, and pay is based on cost reductions and penalties for failure to reduce costs, then doctors will have no choice but to consider patient used devices.

Remote patient monitoring (RPM) devices will apparently be coming on the market in a variety of ways (prescribed and over the counter). For those devices that are prescribed, doctors and hospitals would be wise to have one of these in stock and test the reliability for themselves. Then rather than downplaying the FDA approval, they need to discern whether they are as bad as envisioned, or if they are indeed reliable as the Food and Drug Administration has determined. This will mean that the specifications for the patient device may not be a tight as the instrument used by trained personnel in their labs, but it will give some indications of problems needing further medical attention or not.

Doctors and hospitals may also want to have over the counter devices on hand to test them as well. Doctors and hospitals that do not, will be opening themselves to much criticism when they dismiss these as just another device that makes their jobs more difficult. Yes, we know the hypochondriacs will insist on having these devices, but people with the disease or illness will also use them often to their advantage. This will be much like the blood glucose meters people with diabetes use now. Some learn how to use them properly and to interpret the readings, while others just think they are doing this for the benefit of their doctor, which is wrong.

Is the doctor right to be concerned about the legal aspects of prescribing a remote-monitoring device? He is probably right to be concerned, but eventually, our medical system is going to need to realize that devices approved by the FDA for patient use must be excluded from frivolous lawsuits against doctors. This will be especially true when remote patient monitoring becomes required under the Affordable Care Act. Yes, even then there will be people that purchase the wrong device and sue because it malfunctioned for them. The get rich quick schemes people think up will continue until they are no longer alive and then another person will take up the scheme. 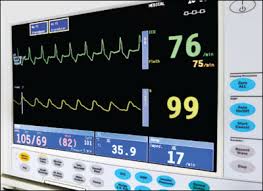 Do I expect to see many more devices for patient monitoring being blogged about? Yes, some will be balanced and concerned like this doctor, but many will be ranted about and have little value for the consuming public.
Posted by Bob Fenton at 00:02